In September 2019 the LOFT celebrated its 30th birthday, an almost biblical age for an operation of such quality and with such an aura, all started single-handedly, now co-run by father and son. The actual foundation of the LOFT took place in 1986, the same year as the opening of the Cologne Philharmonic Hall and the concert hall in the Stadtgarten.
Directly next to the Musikhochschule on Unter Krahnenbauemen Street, an area steeped in history, Hans Martin Mueller (flutist of the WDR Symphony Orchestra and back then a teacher at the Musikhochschule) rented an unused workshop for his workspace and especially as an open forum for music. The location was ideal however some of the neighbours were disturbed by the sounds. Painter Sigmar Polke was one of them and carries the honour of having ended the LOFTs first rent contract with a private agreement.

In 1987, after an intensive search, the top floor in the Wissmannstrasse 30 building was found and rented from the photographer Josef Snobl; two years later it was purchased. After extensive renovation and extension the first rehearsals and concerts began in 1988. The official date for the beginning of the regular program at the LOFT is however September 1989, in this month the first Steinway piano was put into operation. Since that date, concerts (and in earlier days exhibitions) are a regular occurrence in the former Perfume factory.

In the course of time, the factory floor became highly regarded as a performance space for improvised, contemporary, and Jazz music, both nationally and internationally. Most Cologne Jazz musicians who have risen to international recognition took some of their first career steps in LOFT, representative of these are Nils Wogram, Hayden Chisholm, Angelika Niescier, Florian Weber, Frank Gratkowski, Paolo Alvares, Philipp Zoubek, Robert Landfermann, Pablo Held, Jonas Burgwinkel and Sebastian Sternal.

New Music also found a home in the LOFT and the Cologne Society for New Music had its office in the same building as the LOFT for more than 24 years, promoting several workshops and concerts. Figures such as Karlheinz Stockhausen, Mauricio Kagel, Luciano Berio and Dieter Schnebel gave lectures and visted performances of their works. The Cologne Triennale and the DLF have put on their concerts at the LOFT and the Moers Festival has invited the LOFT and its associated scene to five of its projects. The LOFTs own publisher 2ndFLOOR supports selected musicians with the release of recordings, and numerous live-recordings have been published on other labels. The organisation 2ndFLOOR e.V. supports the activities of the LOFT since 2004, so that in 2019 (the last year without restrictions due to the Corona pandemic), 230 concerts were realised (214 in 2018, 204 in 2017, 175 in 2016, 190 in 2015).
In the Corona year 2020, the LOFT broadcasted the first livestream from a German jazz club just a few days after the event bans came into effect, more than 46 further livestreams  plus 63 concerts in front of an audience followed until the end of the year – for this achievement, the LOFT was awarded the top prize at the NRW Venue Program Award ceremony by the NRW State Music Council & the NRW Ministry of Culture and Science in January 2021.

Thanks to its special atmosphere, numerous internationally renowned musicians have given concerts at the LOFT, however the focus of the program has always been the Cologne scene which has received great support here. The Steinway D Grand piano, purchased in 1993, greatly increased the attraction of the LOFT. In 1989, Pi-hsien Chen had already performed the entire piano music of Arnold Schoenberg. In 1994, Paolo Alvares presented the complete piano music of Mauricio Kagel and was also involved in the 1997 Cologne Triannale performances of the complete piano music of Karlheinz Stockhausen in the presence of the composer, alongside Majella Stockhausen, Herbert Henk and Pi-hsien Chen. Prominent musicians such as Adam Nussbaum, Alexander von Schlippenbach, Barre Phillips, Barry Guy, Bobby Previte, Carl Stone, Dave Bargeron, Dave Douglas, Dave Liebman, Evan Parker, Fred Frith, Han Benning, Jim Black, Kurt Rosenwinkel, Lee Konitz, Mal Waldron, Manfred Schoof, Marilyn Crispell, Mark Turner, Matthew Shipp, Michel Ducret, Michel Godard, Misha Mengelberg, Paul Lovens, Peter Brötzmann, Peter Evans, Rebekka Bakken, Tim Berne, Phil Minton, Steve Lacy, Steve Swallow and Simon Nabatov were all heard in the LOFT; the guest list is a real who-is-who of the worlds of improvised music and jazz – for this reason the space was never only reserved for experiments and the first steps and productions of the Cologne scene, but also offered its guests internationally acclaimed acts in the program.

“…it is actually quite unthinkable to create an independent venue for contemporary and futuristic jazz, to make it so musician- and audience-friendly that one can almost completely do without advertising and even the big names of the scene wait patiently for free play dates, and to keep it up for decades.” Felix Klopotek, Stadtrevue 09/2014

In 2000 the concert room was renovated and extended, the possibilities for concerts and especially the acoustics of the room were greatly improved.

The excellent quality of the studio, set up by Ansgar Ballhorn and continued by Wolfgang Stach, Stefan Deistler and Christian Heck, is alongside the superior concert grand piano (in a class of its own in German clubs) a further reason for the success of the LOFT. Numerous live recordings and studio productions have since been release and appeared on CDs, many of them decorated, e.g. ECHO Jazz or Vierteljahrespreis der Deutschen Schallplattenkritik (German Record Critics’ Award).

In 2006 the Prize ceremony of the Cologne Jazz Prize, (the Horst and Gretl Will Scholarship) took place in the LOFT. Most of the winners had already performed at the LOFT and produced their first recordings here.
Since 2011, the ceremony takes places at the Stadtgarten, since the LOFT could temporarily not meet the structural regulations for fire protection.

The final semester concerts of the Cologne Hochschule für Musik und Tanz were carried out in the LOFT for many years (now at artheater), and for long years there was a fruitful partnership with the Rheinische Music school, where each year students of the Jazz and Improvistion departments of the school gave concerts at the LOFT.

Alongside all of this, the LOFT also opens its doors to other organisations such as the Cologne Society for New Music, the “Klang Koeln e.V.”, the “Arbeitsgemeinschaft fuer freie Musik, “Drang Klang”, the “Jazz am Rhein e.V.” and other institutions who have all used the premises for their own concerts and presentations.

It’s a special phenomenon in itself that a non-profit concert venue of such great importance exists at all. Sound of #urbanana 2018

In 2011, the continuation of concert operations at LOFT was once again in question: fire safety regulations threatened the venue’s continued existence. With a solidarity concert organized by bassist Robert Landfermann in the Stadtgarten, both the audience and the musicians (among other things, with €12,000 in donations) reaffirmed the importance of the venue for Cologne as a music location, and so in the fall of 2012, also with the help of the Cologne Department of Culture and politics, the necessary fire safety requirements were met with the construction of an elaborate exterior staircase, and the continued existence was secured.

The Stadtrevue writes: “…the LOFT has long since achieved world fame. The verdict is hardly exaggerated: the purist continuity with which the most important musicians of contemporary jazz and new music are presented here week after week on a non-profit basis and driven solely by the enthusiasm of the organizer and the musicians cannot be found in Berlin, not in Paris, not in Tokyo.” (2010) 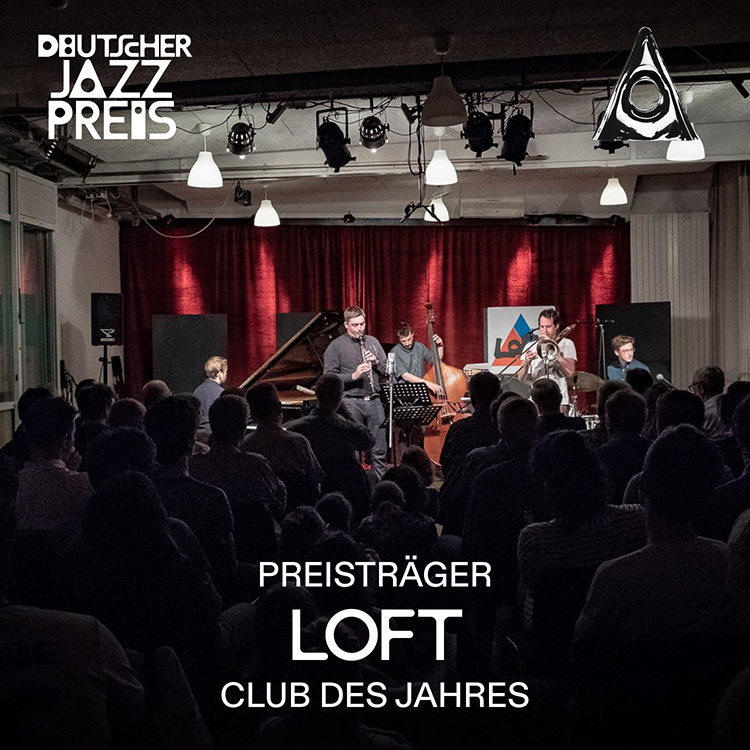 In June 2021, the LOFT was voted Club of the Year by the more than 1,300 members of the German Jazz Union as part of the newly awarded German Jazz Prize, which was presented by the Minister of Culture, Prof. Monika Grütters.