“Magic … Copland is probably one of the most intuitive pianists of our day.“
Jazz Podium (Germany), July 2017

“We keep on saying it…what a magnificent touch, what mysterious beauty in his harmonic choices, what fresh surprises from this subtle lord of the modern piano.”  Jazzman/France (2012) 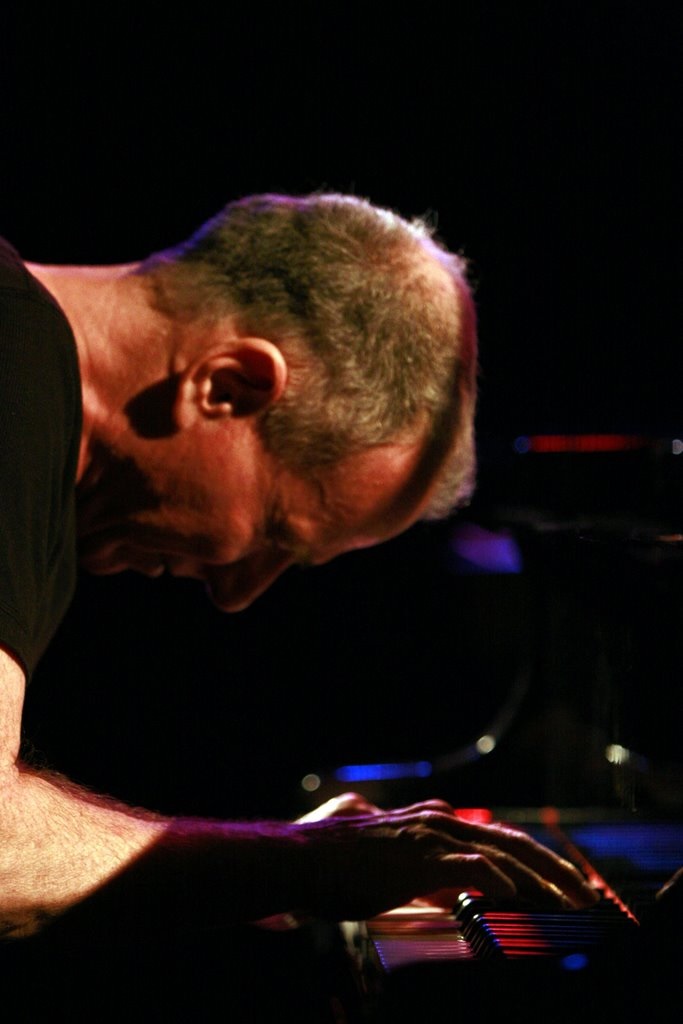 Perhaps the most prolific pianist of the millennium, Marc Copland has recorded some 30 CDs as a leader during the last fifteen years.

From 2004 to 2012, he recorded exclusively with Pirouet records. The beautiful trio CD “Some Love Songs” (Drew Gress and Jochen Rueckert) was followed by the acclaimed “New York Trio Series,” which solidified his position as an innovator on his instrument. Volume III of the series, “Night Whispers,” was hailed by Down Beat as “the strongest top to bottom and most poetic album I’ve heard in a while,” and in a later issue was listed as one of the best CDs of the decade. More followed: another solo CD, “Alone”, a duet CD with longtime partner Gary Peacock; the all-star quintet Contact’s “Five on One” a reunion with partner Greg Osby in quartet with Doug Weiss and Victor Lewis (“Crosstalk”) a duo recording with his longtime partner Abercrombie (“Speak to Me”) and finally, Copland returned to the trio format with Drew Gress and Jochen Rueckert in “Some More Love Songs.”

His recordings from 2000 to 2004 had brought him to a wider audience, including the breakout trio disc “Haunted Heart” and two beautiful solo excursions, “Poetic Motion” (Sketch) and “Time Within Time” (Hatology). In both CDs poetry, instead of ordinary liner notes, accompanied the music. 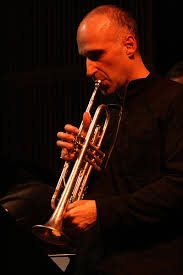 Ralph Alessi was born in San Francisco, CA, the son of classical trumpeter Joe Alessi and opera singer Maria Leone. After taking degrees in jazz trumpet and bass—he studied under the legendary Charlie Haden at CalArts—he moved to New York, where he swiftly became an ubiquitous presence on the downtown scene. He’s been a frequent collaborator with such notable musicians as Steve Coleman, Jason Moran, Don Byron, Ravi Coltrane, Fred Hersch, Uri Caine and Dafnis Prieto. Alessi has recorded nine albums of original compositions which draw on everything from post-bop to neo classical music. Jazz Times named his debut CD “This Against That” one of the ten best recordings of 2002. In 2010, Alessi released “Cognitive Dissonance” which received a 4 star review from Downbeat magazine and was included in The New Republic’s top ten list of records of 2011. In 2013, Ralph released “Baida”, a quartet CD on ECM records and “Only Many”, a duo recording with pianist Fred Hersch on CAMJazz.

As an educator, Alessi has been a member of the faculty of the Eastman School of Music and is currently the founder and director of the School for Improvisational Music (www.schoolforimprov. org), a non-profit entity currently holding improvisational music workshops in New York City and abroad. Since 2002, he has been on the jazz faculties of New York University and the New England Conservatory.

“His solos are a tour de force.” Jazz Podium “Donkin grabs the ear without being showy. His drive, sound, and melodic sense make it clear why he’s in such demand.”  London Jazz 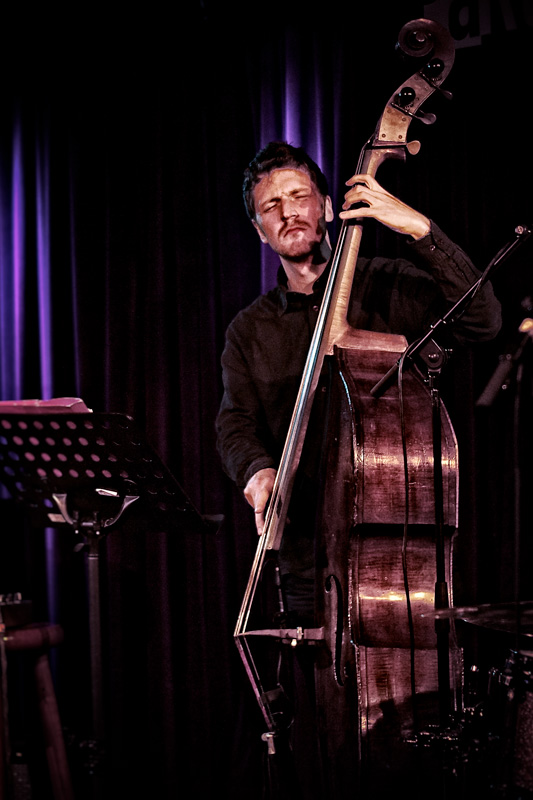 Phil Donkin has risen to become one of the premier European bassists of his generation. Born in Sunderland, North-East England, Phil grew up in a musical family and was surrounded by a vibrant local music scene. At the age of 12, he was playing with local bands; in 1998 he moved to London to deepen his musical studies. After graduating from the prestigious Guildhall School of Music and Drama in 2003, Phil quickly became one of the UK’s most indemand bassists. He performed and recorded with musicians such as Kenny Wheeler, Evan Parker, Julian Arguelles, Tim Garland, Stan Sulzmann and Gwilym Simcock. As Phil’s reputation spread beyond the UK he toured Europe with the likes of John Abercrombie, Marc Copland, Bill Stewart, Greg Osby, Kurt Rosenwinkel, Chris Speed, Ari Hoenig, Jonathan Kreisberg, Terrell Stafford, David Binney, Tyshawn Sorey, Nils Wogram’s Root 70 and many others. He also performed with jazz legends Quincy Jones, Roger Kellaway and Eddie Henderson. In 2010 Phil moved to New York City where he played with artists such as Ben Monder, Kevin Hays, Adam Rogers, Mark Turner, Seamus Blake, Steve Cardenas, Bruce Barth, and Edward Simon. Now based in Europe, Phil is active on both sides of the Atlantic. He has played on over 50 European and American recordings. His debut album as leader, ‘The Gate,’ was released on Whirlwind Recordings in March 2015; it features Ben Wendel, Jochen Rückert and Glenn Zaleski. 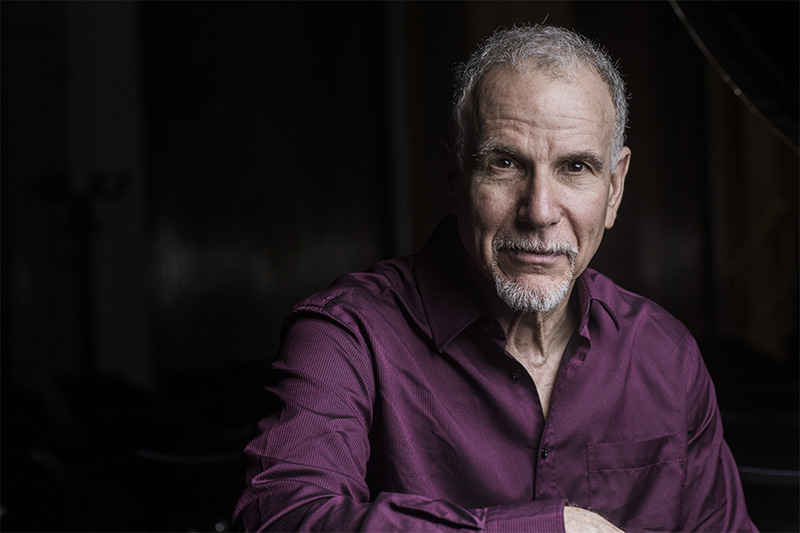 Beginnings
Born 1948 in Philadelphia, Marc Copland began to study piano at the age of 7, but stopped with this instrument at the age of 10, when his school suggested he learn to play the saxophone.

On alto saxophone, Copland was an active part of the Philadelphia music scene from the sixties, learning and playing with his friend Michael Brecker. In 1965 he briefly studied harmony with Aromeo Cascarino, as well as composition with Meyer Kupferman and saxophone with Joseph Allard, traveling weekly to NYC to meet with the latter two.

In 1966, Copland moved to New York, enrolling at Columbia College. He dived into the NYC music scene, which was in the process of spreading outwards from the clubs into lofts throughout the city. Along with John Abercrombie and Glen Moore, he was a member of the Chico Hamilton Quartet for two years. He began to experiment with electronic attachments to his horn on the album Friends, with Abercrombie, Clint Houston, and Jeff Williams. This recording garnered a 5 star review from Down Beat magazine, and became a cult hit.

The Piano
Copland was composing, and his music began to utilize harmony that was more and more complex. This music seemed to him ill suited to the saxophone, which led him to search for a musical vehicle other than the saxophone. In 1973, he decided to become a pianist.

During the next decade, Copland moved to Washington, DC, and built his career from there. I often accompanied touring musicians from NY, such as Randy Brecker, Bob Berg, Art Farmer, Curtis Fuller, Tom Harrell, David Liebman, and Gary Peacock. He also had his own groups, and became a fixture in local clubs.

At the beginning of the 80s, Marc Copland returned to New York as a pianist. He played with Joe Lovano, Herbie Mann, James Moddy, John Scofield…as well as with his own bands. Upon learning that the Japanese label Jazz City was looking for ten American pianists, Copland sent a cassette to guitarist and producer Yoshiake Masuo. The submission was at first rejected, as the label had already found the ten pianists they needed; but some weeks later, after one of the ten dropped out, Masuo called back and offered the pianist his first recording as a leader, My Foolish Heart, in 1988. Copland recorded two more albums with this label, All Blues at Night (1992, with Tim Hagans, Gary Peacock, and Bill Stewart) and Songs Without End (with Ralph Towner).

Concerts in trio and quartet became more frequent, and Copland began to tour the USA in trio with Peacock and Bill Stewart, later with Billy Hart.

On the recommendation of Peter Erskine and John Abercrombie, Copland recorded with Vince Mendoza and met on this occasion the producer Takao Ogawa. This meeting resulted in the 1995 recording Stompin with Savoy, produced by Ogawa, with an all star quintet including Randy Brecker, Bob Berg, James Genus, and Dennis Chambers. His previous Japanese albums had been poorly distributed in the USA, so this album effectively became his American debut. This quintet toured the USA over a period of three years.

Copland began touring in Europe in the mid-nineties, first in duo with John Abercrombie, and later in trio and quartet. Several European labels began to show and interest in his work.

In Europe
In 2001, the French producer Philippe Ghielmetti heard Copland’s trio in Paris and invited him to record his first solo album, Poetic Motion, which was comprised almost entirely of the pianist’s own compositions. The album was built in conjunction with the verse of American poet Bill Zavatsky. Three years later, Copland returned to the solo format on the Swiss label Hatology (Time Within Time, 2005). These albums gave Copland more freedom to show his unique approach to music.
He recorded duos with Tim Hagans, Vic Juris, David Liebman, Greg Osby, Gary Peacock and Bill Carrothers, helping to revive this format which at the time had been relatively little used.
But it was Haunted Heart and Other Ballads (Hatology, 2001), recorded with his regular trio of Drew Gress and Jochen Rueckert, that resulted in Copland being better noticed by the general jazz public.
He recorded also in quartet with various lineups, including John Abercrombie, Michael Brecker, Randy Brecker, David Liebman, Drew Gress, Billy Hart, Tony Martucci, Greg Osby…
Beginning in 2005, he recorded several discs for the German label Pirouet, including the three-volume “NY Trio Series.”
Beginning in 2013, he recorded for the German label ECM as a member of the groups of John Abercrombie and Gary Peacock.

InnerVoice Jazz
In 2016, Copland began to record for his own label innerVoice Jazz. The first disc in 2016 was Zenith, in quartet with Ralph Alessi, Drew Gress, and Joey Baron. In 2017 came Better by Far, also featuring the same quartet; and the pianist’s first solo outing in several years, Nightfall.

Style
Copland is an examle of the “lyric” school of jazz piano. His music is often cited for its innovative harmonies. Has use of the pedal, is very sophisticated; other pianists have been known to position themselves at concerts so that can watch his feet while he plays. His mastery of the colors of the piano led the press to dub him “the piano whisperer.”